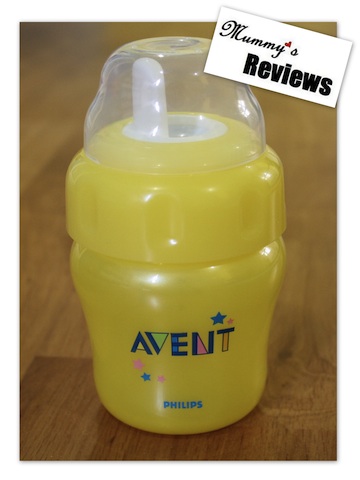 Baby V has been exclusively breastfed since birth; as a Stay-At-Home-Mum, I enjoy the convenience of direct feeding. I gave him a bottle-feed 1-2 times a week so that he would get used to the bottle teat. When I observed that he LOVED the bottle teat, complacency set in and I stopped offering him expressed breastmilk (EBM) for a while (he was 3 months 3 weeks old).

A month later, I gave him a bottle-feed and he totally rejected it! Panic set in and I quickly searched for an alternative, which was when I bought AVENT Magic Cup Soft Spout.

For the past month, I have been offering Baby V about 10ml of EBM almost daily using the Magic Cup. He neither rejects the spout nor drinks from it; he simply bites it (maybe treating it as a huge teether) and plays with it using his tougue. Hopefully, he will learn to drink from the cup soon.

Vee is now 15 months old and drinks well from open cups. I was curious if he could now sip from this cup. If he does, I could use it as his water bottle. I let him try the cup, yet he still does not sip from it. Guess this cup is fated to belong to the next baby.
—