Have a fussy eater who doesn’t like to chew? Doesn’t like vegetables? Yet loves crunchy snacks like crackers? Just wish to have more peaceful meal times without resorting to TV / iPad / i-anything?

Here’s a compilation of the various ways I’m using to “tackle” my 2 older boys (Vee and Jae), written in a Q & A style. Baby El just started eating solids, which is the best time to set good eating habits.

Q: I’ve a fussy eater who eats very little during meal times. After that, he’ll say he’s hungry. Should I feed him snacks?

A: If my kid is hungry after finishing his meal, he can have healthy snacks, even straight after meal is fine. In fact, I do that myself. They watch me start eating snacks such as wholemeal cereal flakes / wholemeal crackers / banana after lunch and rush to do the same.

But not finishing meal (and not ill), I’ll remind him during meal time that it seems like he isn’t hungry. Next meal time is X o’clock.

I may refrigerate leftover food (not contaminated with saliva) and heat it up 1-2 hours later. Hungry? Continue with previous portion. Else wait till the next meal.

Breakfast: I’d usually include healthy foods they like. For example, banana, yoghurt, sunflower seeds, a few raisins (only about 1 to each year of age to prevent sugar-rush and hyper kids). This way, he gets one proper meal and has less craving in the day.

Even if they finish their meal, official snack is only milk and no / a little bit of food. I like to let them be hungry by meal time, which makes them look forward to eating.

Q: I don’t wish to force feed during meal time. But if I disallow snacks when he says he’s hungry after meal time, will he starve?

A: I’m rather sure most of our kids won’t starve. They need to experience real hunger to appreciate food. Quite the opposite is happening in our modern society, our kids seldom feel real hunger so fussy eaters appear.

Q: What is considered finishing his meal? How much should I offer my child?

A: I give toddler Jae (2.5yo, 14+ kg) 1 kid’s size bowl of food and 1 bowl of soup, which I know he can finish. This is based on observing his appetite since young. And on how much he can finish favourite foods.

If you’re starting a routine, offer a small portion of food including some fruits first, something he can finish. Let him experience a sense of achievement. Then gradually increase the portion.

For a baby or toddler, I usually will prepare 2 bowls. 1 bowl containing his full portion of food. Another bowl for the feeding portion. I’ll scoop a bit of food into his feeding bowl and let him try self-feeding or with some assistance (such as holding my finger). When that’s done, then scoop more food into the feeding bowl.

For a child who’s under-eating, you may experiment with a bigger bowl. Recent research shows kids with bigger bowls tend to want more, eat more and waste more. (View the article here)

Q: How much fluids or soup before and during meals?

A: I don’t offer fluids just before meals else it’ll fill tiny tummies. If he’s thirsty, I do allow sips of water near meal time.

(So for someone who wish to reduce appetite, drink soup at the beginning of the meal.)

A: For some time, Jae didn’t like to see green vegetables in his bowl. He’d try to pick them out.

For his self-feeding bowl, I put other food except vegetables. I’ll feed him vegetables mixed with some food from another bowl.

He has a hard time chewing leafy vegetables and anything too tough, so these have to be cut very finely. When outdoors during weekends, I let him skip our vegetables and take packet vegetable purée* as a supplement. He’s happy to feed himself an entire meal of rice / noodles, tofu, egg, etc.

You may also offer vegetables blended into milk smoothie or minced meat / rice balls with vegetables.

Whatever he says, I’ve never stopped offering vegetables to him since babyhood. Keep trying and let him watch the family eat vegetables.

Let her learn from natural consequences: When Jae’s bums hurt from slightly hard stools, I’ll remind him that he needs to eat more green vegetables. The next time he says he doesn’t want vegetables, I’ll comment “Oh dear… what if your bums hurt again?”

Another way is to include her favourite healthy food/fruit in meals. For example, Jae loves eggs and cherry tomatoes. For a long time, there’s egg during every lunch and cherry tomato bits in every dinner. This way, he ate with less fuss. Sometimes, I include apple / pear bits in his food when the rest of us are already eating fruits. He likes the crunchiness and natural sweetness of fruits.

Q: My child is unable to chew vegetables and anything too tough. She can keep food in her mouth for a long time.

A: I don’t fight with Jae over this anymore. With 3 kids to settle at the dining table, there’s no time for helicopter parenting. If that mouthful is inside for longer than normal, I confirm with him “Can’t chew?”, then allow him to spit back into the bowl.

I’ll cut it even finer, or put aside if it’s really too tough, and offer another spoonful. And I try to be careful that nothing is too hard to chew onwards. Else, he may keep spitting out or refuse to eat anymore.

We usually only eat (non-fish) meat outdoors, so I make sure it’s the softer or minced type, else no need to bother. I simply offer him rice / noodles + tofu / egg.

Q: My kid loves fried and crispy stuff with his meals. How to avoid this unhealthy habit?

A: My kids love crispy stuff too. Which kid doesn’t?!?  Try  to occasionally pan-fry animal protein including eggs and meat. .

(Editor’s note 12/7/2020: Read more about the coconut oil controversy at Here’s What the Experts Say About Coconut Oil)

On the other hand, avoid frying and baking plant-based food such as potatoes: Acrylamide in Food and Cancer Risk

Apparently, breakfast cereal may produce acrylamide too. Yet during really fussy periods, I’ve added a few in the kids’ meals to eat with the proper food. As mentioned earlier, adding crunchy fruit bits does the trick too.

Q: What do you feed your children with? 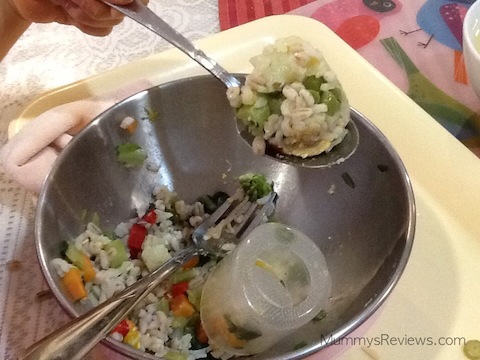 Simple, wholesome, nutrient-dense food. Children’s tummies are small, so every mouthful of food (at home) has to be packed with nutrients. For lunch and dinner, these are our ingredients:

I do only a weekly rotation for the kids and myself:

It sounds boring yet the ingredients are full of natural flavours and textures. Keeping things simple is easy for whoever is cooking too.

In the picture above, Vee’s having fun using a mould to make his own “sushi”.

In the picture right at the top, it’s Baby El’s rice cereal with steamed sweet potatoes and a bit of extra virgin coconut oil. He gobbled it up, phew!

Tackling fussy eaters can be challenging. When Jae kicks up a fuss about food (again!), I laugh it off that it’s karma — I used to be a skinny fussy eater. Hated rice, hated veges, hated plain water, refused to eat bread with even 1 tiny hole, rejected half-boiled egg with the yolk burst, wary of new food, loved junk food, fell ill every 3 months.

Yet now, I can live on a meatless diet, drink lots of fluids, am healthy almost all year round, and no longer underweight. Some day, I grew up and learnt about eating a proper diet for long-term health. Have faith that kids can outgrow fussy eating!

Hope this article helps and may you have a peaceful meal time! 🙂

P.S. Wish to unleash your child’s potential in only 15 minutes a day? Check out my online workshop at:

Disclaimer: The above is sharing from my personal experiences with my children, and is not substitute for medical advice.